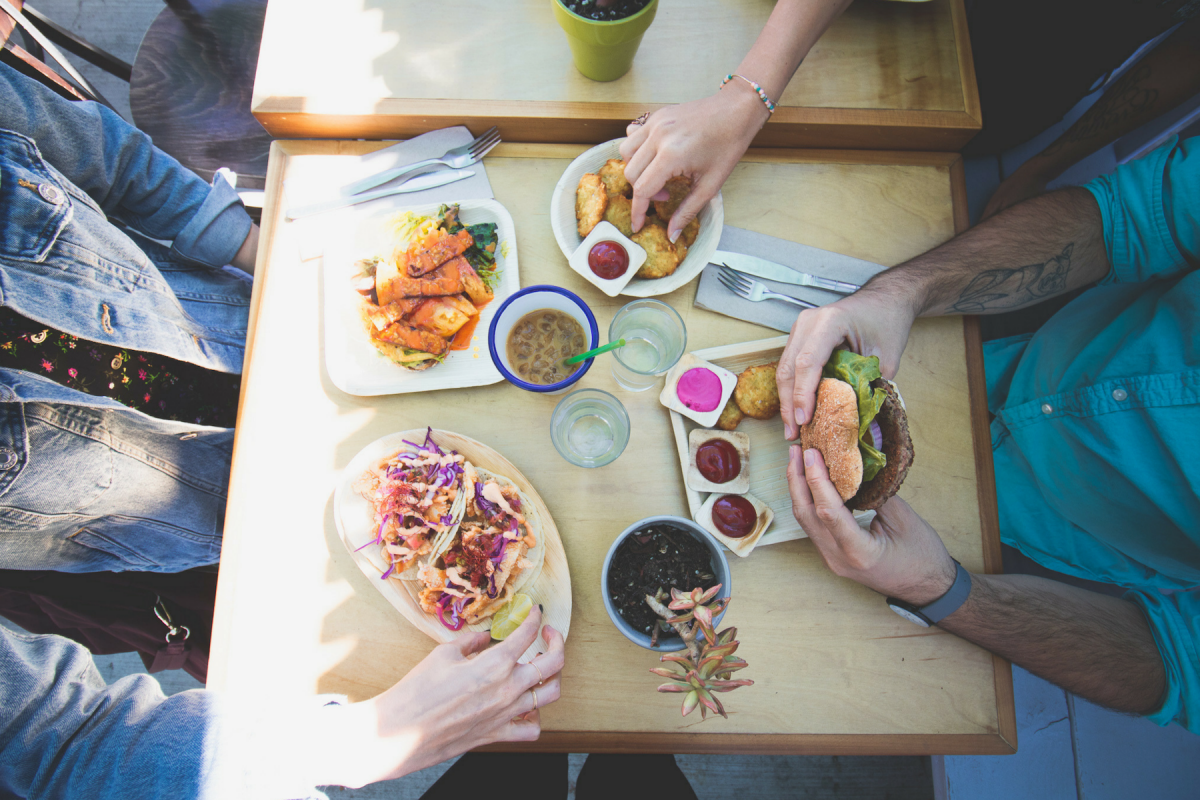 This city just never disappoints! We knocked two more amazing restaurants off our list in Los Angeles over the last 24 hours. I still cant get over how many different options there are here. We’ve been been coming to LA at least once a year for the last 4 years and we haven’t even come close to trying all the vegan food it has to offer.

No shortage of vegan food here

This time, we were in Los Angeles for just over 24 hours, but I’d like to think we made the most of it. We asked around for recommendations to see if there was anything that wasn’t already on our radar that we should know of.  Here are some of the places that were suggested to us:

Lots of choice, but let’s talk about where we actually ate this time around 😉

Our friend Avra, from Love Wild Live Free, recommended we check out Krimsey’s Cajun Kitchen. Christopher had already been, but I hadn’t, and it was close to where we were staying, so it was a no brainer. We ended up going for brunch. HOLY CRAP.

The food here is so good! The flavours are bomb. Christopher was so impressed, he said that the pancakes here are the best he’s ever had (and we’re no strangers to pancakes). I tend to prefer savoury food and opted for the Poboy, mainly because I had no idea what it was — I now know that it’s a traditional Louisiana sandwich — and was curious to try something new. I’m drooling just thinking about that sandwich right now. Nothing to see here people!

We were planning on trying Monty’s Good Burger at night for dinner… but we were still too full from brunch! We’ll have to make our way to Koreatown next time and get our hands on what people are calling the best burger in Los Angeles.

On our second (and last, too short right?) morning in town, we were planning on checking out FLORE, and made 10 am breakfast plans with our friend Megan (you might know her as Carrots & Flowers), but didn’t actually realize that the restaurant only opened at 11 am. OOPS.

Now we’ll know to always check opening hours before making plans. But this worked out because Los Angeles has so many amazing vegan restaurant options. Phew 😉

We switched things up, and ended up going to JEWEL instead, just off of Melrose. A plant based restaurant, not specifically vegan, vegetarian, or gluten free.

Christopher was itching to try the Impossible Burger. It’s supposed to  have the same flavour, aroma,  and beefiness as meat. Not that he missed it, but for people struggling to transition, it has the potential to really make a difference, so he was curious.

I was torn between getting the breakfast burrito or the tacos. The cocomari tacos won me over. I’d never seen any made with crispy young coconut meat before. Didn’t even know that was a thing. A breakfast burrito, though delish, is pretty much similar from place to place in my opinion, so try new things!

I’m happy with the choice I made. The tacos were hella good.

Christopher wasn’t sold on the Impossible Burger (it was 17$, but apparently cost on the patty is a whopping 10$). I had a few bites. Not sure what the hype is all about, to be honest. He thought it was good, but a bit mushy and a little too grey-looking for a repeat. Beyond burgers ftw.

Overall, absolutely loved our experience at Jewel (especially being in such great company) and hope to go back again.

Drop us a comment and let us know what your favourite restaurants in LA are. If you’re looking for some other great things to do in Los Angeles, check out this super comprehensive travel guide Christopher made!