You may or may not know that August 22nd is World Plant Milk Day. While that may seem silly at first, it actually matters a whole lot. (and not just because it’s perfect for making your frozen hot chocolate!)

Dairy, in a nutshell

The plant-based milk industry is booming, poised to double in size in the next 5 years. And for good reason.

Claims that dairy is healthy are dubious. But a wholefood plant-based diet, including plant milk, is increasingly recognized as the healthiest diet, even before environmental and ethical considerations.

But of course we should consider the environment. Dairy production is a significant contributor to climate change, a leading polluter, and waster of fresh water resources.

And what about the ethics of raising cows for milk production? There are 270 million cows worldwide. Newborns are taken from their mothers so that the milk can diverted for human consumption. Males are killed within weeks and sold as veal.

Do you really need another reason to switch to non-dairy?

Don’t get me wrong, I like soy milk. But did you know you can also buy oat, almond, and cashew varieties? And that’s just me naming a few. My personal favourite is Earth’s Own SoFresh Cashew. It’s nice and creamy. I’ve been using it as long as I can remember.

When Earth’s Own reached out to ask us if we’d like to try their new almond milk recipe, we of course said yes. We were already fans anyway. Who knew it could get even better?!

Vic and I had a fun time of it, doing a blind taste test and everything. It’s saved to our Insta stories for your viewing pleasure.

Love the taste or it’s free

Here’s the best part. If you’re thinking that you want to do your own taste test, Earth’s Own has you covered. They want you to try their new, creamier, almond-ier taste, and if you don’t totally love it, it’s free.

How’s that for a sweet deal? Heads up though, I don’t think you’ll be returning it for a refund, because it’s D-E-L-I-S-H.

It’s good straight, with cereal, or a chia pudding, but when you’re really looking for a treat (especially on a hot day), I’m telling you frozen hot chocolate is where it’s at.

I remember when Vic and I were in Vegas years ago, we went to this somewhat famous little spot called Serendipity (it’s closed) to buy a $200 (I’m exaggerating) frozen hot chocolate.

Here’s some news for you. This do-it-yourself version is way cheaper, totally dairy free, and miles more delicious than the one that blew our food budget on vacation years ago.

Optional: For a really creamy drink, fill an ice cube tray with SoFresh Almond and replace the ice cubes in the recipe. 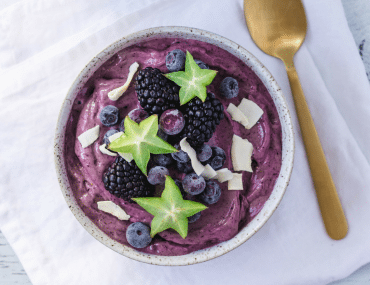 Love How You Feel — It starts with breakfast …and some greens!